In celebration of what would have been Rachel Carson’s 107th birthday tomorrow, we are happy to honor her legacy with a post including several journal articles that relate to her life and work. Famous for Silent Spring (1962) among many other projects, Carson is credited with influencing the modern environmental movement and inspiring a change in national pesticide policy and a nationwide ban on DDT for agricultural uses.

In “Spinster Ecology,” Sarah Ensor investigates the role of futurity in queer ecocriticism how the figure of a spinster can help to resolve tensions between two schools of thought. Read an excerpt:

Attempting to discredit Rachel Carson’s 1962 book Silent Spring, former Secretary of Agriculture Ezra Taft Benson wrote to Dwight D. Eisenhower and asked ‘why a spinster with no children was so concerned about genetics.’ Benson’s attack, its misogyny at best thinly veiled, makes legible one of the central challenges to developing a queer ecocritical practice: the status of futurity. Contemporary environmentalism, especially given the recent emphasis on sustainability, tends to be future-oriented, its rhetoric predicated on matters of inheritance and procreation alike…. Much recent queer theory, by contrast, insistently resists futurity, marked as it often is by heteronormative imperatives. What does it mean, then, to develop a queer ecocriticism? 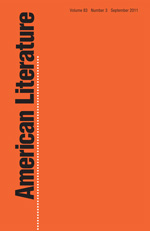 “The New York School of Urban Ecology” by Jamin Creed Rowan argues that Rachel Carson’s ecological voice helped change the tone of the New Yorker and “helped solidify a literary and intellectual tradition that infused the city’s social networks with social value.” Read an excerpt:

Although Rachel Carson is perhaps best remembered for dramatizing the environmental consequences of pesticide in Silent Spring (1962), many readers first discovered here in the New Yorker writing about the sea–not DDT. Edith Oliver, a staff editor at the New Yorker, recommended Carson’s manuscript for The Sea Around Us to editor-in-chief William Shawn in 1950. Shawn was even more enthusiastic about this relatively unknown naturalist and offered to buy nine of the book’s fourteen chapters. He then condensed these chapters and published them, rather unusually, as a three-part series in June 1951 under the magazine’s “Profiles” rubric. While recognizing the significance of Carson’s New Yorker publications for her subsequent career, critics have found it difficult to explain her appearance in a magazine targeted, according to founder Harold Ross, at ‘persons who have a metropolitan interest.’

To read more from “The New York School of Urban Ecology,” click here.