Joshua Neves, author of Underglobalization:
Beijing’s Media Urbanism and the Chimera of Legitimacy, is Associate Professor and Canada Research Chair, Film Studies at Concordia University and coeditor of Asian Video Cultures, also published by Duke University Press. He wrote this post on February 21, 2020 and updated the statistics today, March 11.

In the 2018-19 flu season, the United States’ Center for Disease Control (CDC) estimated that 16.5 million Americans saw a health care provider for their illness, 490,600 people were hospitalized, and 34,200 people died from influenza. Such data helps us to temper recent panic about the coronavirus, contagion narratives, and the repressive Chinese state.

To be sure, the strict management of information and party-state bureaucracy have plagued China’s response to the virus. My aim here is not to downplay what are very grave challenges to public health, but rather to turn attention to the ways the viral outbreak has also been swollen by frenzied news and social media around the world. Among the many responses in North America and Europe, for example, is a resurgent anti-Chinese racism. This includes suspicions about exotic animals and racialized ideas about sickness and disease, as well as alarm about surgical mask shortages, government cover ups, and entire cities under quarantine. As a recent US headline puts it, “First the media sold you overblown fears. Now it’s selling false comfort.”

But there is little new in this hysteria over China as a breeding ground for pandemics. From counterfeit medicine to authoritarian capitalism, China plays a complicated role in stories about the world system. On the one hand, it’s laboring population serves as factory to the world and has sustained the global economy through stagnation and crisis. It both produces the world’s best known things and is derided as a menial laborer or copycat—and not, that is, a designer. A major theme in recent news coverage centers on profits lost to factory closures. In many such stories, concerns about the well-being of migrant workers, among others, seems limited to their inability to get to work. On the other hand, even while China co-creates what we have come to know as globalization, its ambition and the challenges it poses to the Washington Consensus have led many to see the country as a global villain. Alongside Russia, Iran, etc., the PRC increasingly fills an imaginary void in post-Cold War geopolitics. It is the “other” that “we” organize our anger or fear around.

What interests me about the tensions framing the COVID-19 outbreak is that China is at once understood to be inside and outside of the world or proper society of nations. It is both a prime mover and sickly underminer. This contradiction—including mistrust, intolerance, fear—must be tied to a history of anti-Chinese racism in North America and elsewhere. Not surprisingly, the current “yellow peril” is once again linked to the exploitation of Chinese workers, as well as a deep suspicion of these same people’s motives and lifeworlds. It highlights the inequality of global supply chains—a current logic of racialized capitalism—which seek to move things in specific directions and keep everyone in their place. It is this sense of global order that the virus ignores with its potential to spread where it should not. Contagion thus not only refers to the unruliness of new flu strains, but to the new mobilities of Chinese people, products, and technologies. The latter includes US attempts to block the Chinese company, Huawei, from building 5G infrastructure around the world. Officials claim that Chinese built networks will allow Beijing to infiltrate critical telecom infrastructure, making them insecure and threatening. These same reports rely on language that could just as well describe panic about the infectivity of influenza. Per Vice President Mike Pence, “We cannot ensure the defense of the West if our allies grow dependent on the East.”

The point of highlighting such tensions is not to bracket the very real problems posed by the People’s Republic of China or its vision of the future. But it is to refuse sweeping and prejudicial assessments of China and the Chinese, which inform insidious racisms by tethering ideas about counterfeits, censorship, exotic animals, the flu, and much more, to particular bodies. Put simply, these critiques are widespread, confused, epidemic—and demand more nuanced attention from journalists, scholars, and publics. What remains undigested by routine critiques of China, and is once again brought into relief by the recent outbreak of the outbreak narrative, is how smug dismissals buttress troubling ideas about the munificent “West” and the “free world.” This is one of the most menacing and normalized aspects of anti-Chinese racism in the North Atlantic. It locates viral contagion in Asian cities and populations, naming them as external threats, thereby consolidating a violent clash of civilization understanding of the earth. Here is safe; there is toxic.

It is important to add that, contrary to Euro-American assumptions about Chinese repression and citizen compliance, political dissent is endemic and visible across the PRC. For example, in Social Protests and Contentious Authoritarianism in China, political scientist Xi Chen describes both the dramatic rise and routinization of social protest in China and also how, “beneath the surface of noise and anxiety,” China’s political system remains stable. This is a complex political formation and no doubt differs from the imagination of protest in places like the US. But these differences notwithstanding, it is important to understand that protest and dissensus are frequent responses to life in contemporary China—and many Chinese citizens are “more than ready to blame the Communist Party for suppressing public health information and closing ranks against the people.” What is distinct, and marks an increasingly global condition, is that such protests are not made within formal civil society. Instead they are quasi- or il-legal, and suggest new modes of political society. Consider the January 2020 essay, “When Fury Becomes Fear,” from the outspoken former academic and critic, Xu Zhangrun. In searing prose, Xu argues that the current epidemic sounds a “viral alarm” and “has revealed the rotten core of Chinese governance.” See Geremie R. Barmé’s translation of Xu’s essay here, a Wuhan diary here, a typical report about netizen responses here, or the Sinophobia tracker here. What matters about such examples, is that they refuse the self-righteous politics of pity—where, for example, Americans are free and Chinese are controlled—and instead demands that we re-examine the workings of popular politics under globalization, which includes China and the so-called “West.” 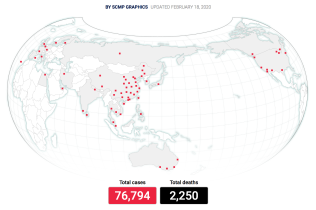 As I write, 4,379 people have died from the coronavirus and nearly 119,108 cases have been confirmed. Currently over 1000 deaths have been reported outside of China, with Wuhan, Hubei Province, still the most affected area. While details vary, reports indicate that lockdowns and curfews affect hundreds of millions Chinese citizens. The strictest rules, per the South China Morning Post, keep 60 million Hubei residents from leaving their homes. Further coverage suggests that the epidemic may now have peaked, as its spread slows in China, though others note that Japan is now a hotbed for the virus, with new cases also confirmed in the Philippines, South Korea, Iran, Egypt, and others. I linger on the current flu epidemic, stories about its (mis)management, and its Asian hosts and itineraries because they bring into relief a range of issues that are critical to what I call underglobalization.

When writing Underglobalization, I struggled to make sense of the contradictory and often racist understandings of China that co-exist in much official and popular discourse. As above, I was struck by the way that China is both dismissed as a fake, parasite or outlier nation and, at the same time, is critical to both the global economy and institutions, and to the everyday experience of the world. This paradox brings into relief deep structural conflicts over what constitutes political, economic, and social legitimacy in the present and future. Against such antagonisms, Underglobalization charts how a wide range of social actors underperform or refuse to implement the specific procedures and protocols required by globalization at different scales. Put differently, what international law (like the TRIPS Agreement) identifies as illegal must also be understood, in many contexts, to be locally valid. One important ramification of this claim is the recognition that contemporary global dynamics are shaped by increasing tensions between (il)legality and (il)legitimacy. Most simply the book asks: what happens when legal contracts around the world—including rights, civil society and citizenship—fail or become dangerous, and on what ground are political relationships reclaimed and sustained?

Save 30% on the paperback edition of Joshua Neves’ Underglobalization using the coupon code E20NEVES and download the introduction here.

"The Transsexual/Transvestite Issue," edited by Emmett Harsin Drager & @lucas.platero.mendez, is out now from TSQ! It includes:
#MESA2021 is here! Check out our blog linked in our profile for updates on where to find us. Until January 15, 2022, save 40% on all books and journal issues when you order online with coupon code MESA21.
Friday, November 26th would have been Michel-Rolph Trouillot’s 72nd birthday. ⁣
We're giving away 2 advance reader copies of Diminished Faculties by Jonathan Sterne.