Last November, Bolivia experienced a right-wing military coup d’état ousting Evo Morales and the Movement Toward Socialism (MAS) party based on alleged electoral fraud, with the support of the US-backed Organization of American States (OAS). Overturning the official election results, Jeanine Añez of the right-wing Democrat Social Movement party was declared interim president, and the nation burst into civil uprisings decrying the coup government and calling for the restoration of democracy through the electoral process (though mostly MAS opponents had taken to the streets previously to protest the elections). Pro-MAS protesters, many of them Indigenous, were met with violence, and Morales fled to exile in Mexico and then Argentina. Almost a year later and after much social unrest, general elections were held in Bolivia on October 18, 2020, resulting in a landslide victory for Luis Arce and David Choquehuanca of the MAS party. Shortly thereafter, Morales triumphantly returned to Bolivia in early November.

What does the MAS victory mean for the future of Bolivia? In this roundtable, Duke University Press authors and Bolivia experts Mark Goodale, Thomas Grisaffi, and Bret Gustafson share their thoughts on the future of Bolivia, particularly as it pertains to the industrialization of lithium, the production of coca, and the future of the natural gas industry, respectively.

Lithium Industrialization in Bolivia after the Coup – Mark Goodale

With the return to power of the MAS in Bolivia, one of the only things I’m confident in saying is that we will need many more months, perhaps even years, and the commitment of research dedicated to the question, to fully understand the contours of the last year. This past year began with a rightwing coup d’état and ended with the resounding electoral triumph of MAS at both the executive and legislative levels (yes, I analyze the mobilizations and eventual Camba takeover of October and November 2019 as a coup, even though it is a strange coup that ends with the golpistas, or coup plotters, allowing a democratic process to play out that leads to their ouster and coup leaders facing likely prison sentences).

But what concerns me here is something more specific: the likelihood that the new MAS government will re-start what was among the most important initiatives right up until the October 2019 election. This is the state project, managed by Yacimientos de Litio Bolivianos (YLB), to industrialize the country’s lithium resources through an ambitious plan of vertical integration. This process that would oversee the commodity chain in Bolivia from the production of lithium carbonate and hydroxide to its refinement into “battery grade” salt to the development of lithium-ion battery cathodes and, finally, to the production—at an industrial scale—of fully functional lithium-ion batteries targeted for the booming global electronic vehicle (EV) market.

In the months and years to come, the four-year research project I direct (now at the beginning of its second year) will be focusing on three main developments and possibilities. First: how quickly will the new MAS government resume production and construction activities at the main site in the Uyuni Salt Flat, which have been effectively paused for a year, a stoppage that took place even before the Covid-19 crisis struck Bolivia? Although a skeleton crew has been maintaining the evaporation pools, there is real concern that neglect and degradation over this period have set the process back.

Second, will the new MAS government revisit the decision taken by Evo Morales’ administration—as a late-breaking act of desperation during the social unrest in the days after the 2019 election—to annul the contract with the private German company ACI Systems? ACI Systems was acting as a proxy for Germany, which was acting as a proxy for the European Union, which is rushing to ramp up the transition to EVs and, apropos of the annulled contract, rapidly and exponentially increase the capacity to produce lithium-ion batteries within the EU. The contract with ACI Systems gave the German company the right to manage the later stages in the vertical integration process, but this contract was used by a largely Potosí-based anti-MAS civic movement to oppose the alliance and justify the threat of action against production at the facilities in the Salt Flat. Will the new MAS government reconsider the annulled contract with ACI Systems, and, if not, will the government require the state-owned company Yacimientos de Litio Boliviano (YLB), to take charge of the entire process from extraction to the production and distribution of lithium-ion batteries?

And finally, will the new MAS government continue to structure economic policy, including lithium industrialization, based on the radical blueprint set out in the “Patriotic Agenda 2025,” a plan for national development that purports to respond to many of the critiques of the state’s reliance on traditional resource extraction, especially around gas and oil? In particular, will the lithium industrialization process remain the centerpiece of the Agenda’s concept of “productive sovereignty,” which imagines the state’s commitment to more sustainable development (although lithium is also a non-renewable resource) as the expression of both economic independence and decolonization?

The future of drug policy in Bolivia – Thomas Grisaffi

Over the past fifteen years, Bolivia has emerged as a world leader in formulating a participatory, non-violent model in confronting the cocaine trade. The MAS victory in the October 2020 elections ensures that this innovative strategy will continue, but the Luis Arce administration will face challenges to implement it.

Bolivia is the world’s third largest producer of cocaine, a drug manufactured from coca leaf – which is central to Andean culture. Under the Evo Morales administration (2006-2019) farmers in specific zones were permitted to cultivate a small (between 1,600 – 2,500 square metre) plot of coca and were encouraged to self-police to respect these limits.

This community-based model has proven more effective in reducing coca acreage than militarized forced eradication. Government investment has encouraged economic diversification away from coca. In Bolivia, 23,100 hectares were under coca cultivation in 2018, less than half that in Peru.

The policy has been lauded by the United Nations Development Programme as a less violent and efficient way to reduce coca cultivation, and has served as an inspiration to coca farmers in Peru and Colombia.

The relative success of the model does not mean it comes easy. There are debates over enforcement at every local union meeting, and some farmers complain that the upper limit on coca production is too low to meet their basic needs. Some farmers play the system and grow more coca than they are legally permitted.

Morales’s forced resignation in November 2019 threatened the future of the program. Despite being an interim government, the Jeanine Añez administration drafted its own five year drug strategy, which presented a hard-line stance to drug control and threatened a return to forced eradication.

Coca growers can breathe a sigh of relief. The incoming MAS government will surely continue with the community coca control model– but there will be challenges to its implementation.

Many growers supported the program out of deep-seated loyalty to Morales, who as President also headed the federation of growers. By contrast, incoming president Luis Arce, a UK-trained economist, lacks any history in the country’s social movements. He will find it difficult to convince farmers to make the sacrifices necessary for the policy to work.

The community control model relies on high levels of trust between the local coca growers’ organizations and the state, but the violence enacted by the police and military following last year’s coup – including the massacre of eleven coca growers – destroyed these foundations. Luis Arce will have to work hard to rebuild faith in the state, so that going forward coca growers are able to collaborate with the police, military and other official actors to restrict coca and curtail drug trafficking. 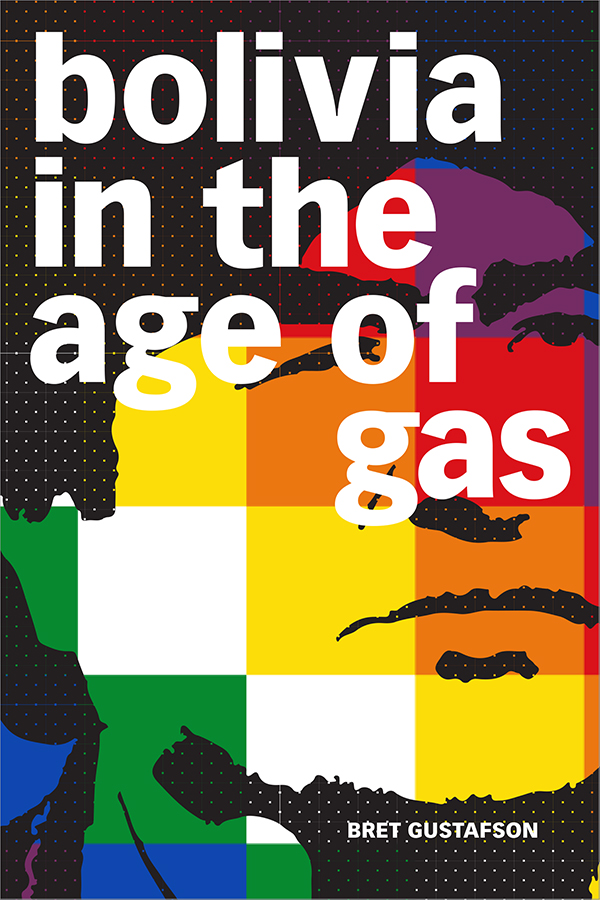 The amazing victory of Luis Arce and David Choquehuanca of Bolivia’s MAS party comes amidst a public health tragedy and challenging economic conditions.  During the government of Evo Morales (2006-2019), the country benefited from high natural gas prices and the expansion of the public sector, policies in part overseen by Arce himself, who was Morales’s Minister of the Economy.

As I explore in Bolivia in the Age of Gas, the period of the MAS government was nonetheless marked by contradictions. On the one hand, Indigenous and other social movements expanded their presence in government and made significant gains, especially in occupying new political spaces and state institutions long characterized by racial exclusion. On the other hand, the dependence on gas revenues led to compromises with foreign capital – and with more conservative sectors of the Bolivian society – that ran against what many hoped would be a more radical political transformation.

In the case of the Guaraní of southeastern Bolivia, the impacts were significant. The gas industry transformed daily life in many communities, bringing new forms of labor and some material benefits, but also new forms of social and ecological violence. Many Guaraní benefited from access to jobs working with the government. Others were forced to deal with huge gas plants, large camps of male workers, disruptive seismic exploration (blasting with explosives to chart the underground), and endless efforts to eke out some compensation for damages.

The right-wing forces that ousted Evo Morales in November of 2019 hoped to bring the MAS era to an end, and would have surely intensified these violences had they stayed in power. Yet the victory of Luis Arce has confirmed that despite the contradictions of the era of Evo Morales, Bolivians overwhelmingly wanted the MAS to return. 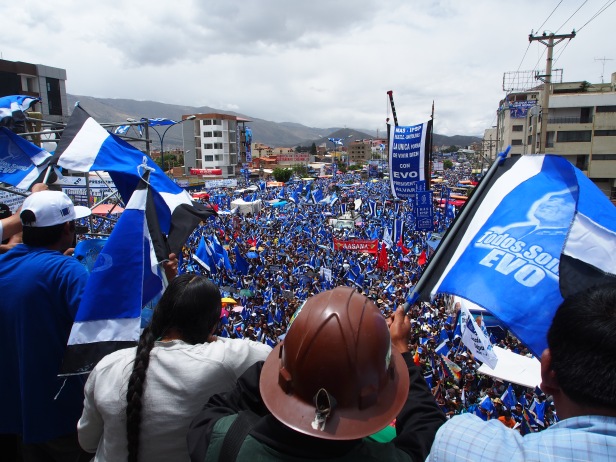 Rally in Support of the MAS in 2014, Cochabamba. Photo by Thomas Grisaffi.

Arce confronts a challenging scenario. Gas reserves are not growing, prices are low, and Brazil and Argentina – Bolivia’s main customers – may soon stop buying so much gas. Many Bolivians see lithium as the new boom, yet its prospects are complicated by national politics and global markets. If Bolivia can find a way to industrialize lithium – making batteries and electric cars, perhaps – there might be some hope there. Yet given what we know about the limits of extractivism, and the particular problems of fossil fuels, one might also hope Bolivia’s new government will deepen its turn to renewables, pursue more economic diversification, and slowly work to free itself from a longer history of being what I call “extractive subjects,” those whose own desires, for better and for worse, paradoxically align with the forces of extractive capitalism.