Sanford Levinson is Professor of Law at the University of Texas Law School. He is the author and editor of numerous books, including Fault Lines in the Constitution: The Framers, Their Fights, and the Flaws That Affect Us Today (with Cynthia Levinson). The 20th anniversary edition of his book Written in Stone addresses debates and conflicts over the memorialization of Confederate “heroes,” with a new preface and afterward that take account of recent events. In this guest post, Levinson meditates on some of the newest controversies, including protests surrounding UNC-Chapel Hill’s “Silent Sam” and sports team mascots.

I am immensely grateful to the Duke University Press for giving me the opportunity to publish a 20th anniversary edition of Written in Stone: Public Monuments in Changing Societies, with a greatly augmented afterword (and new preface as well).  As I noted in the preface, my original suggestion in 2016, when I floated the idea of a new edition, was to prepare about 5000 words that could be submitted in August 2017, with publication taking place in late winter or early spring.  Instead, in part because of what happened in Charlottesville and afterward, the additional material totals around 20,000 words, taking into account events that occurred as late as the summer of 2018, just before the book went to press. As John Lennon is said to have said, life is what happens when you’re busy making plans! 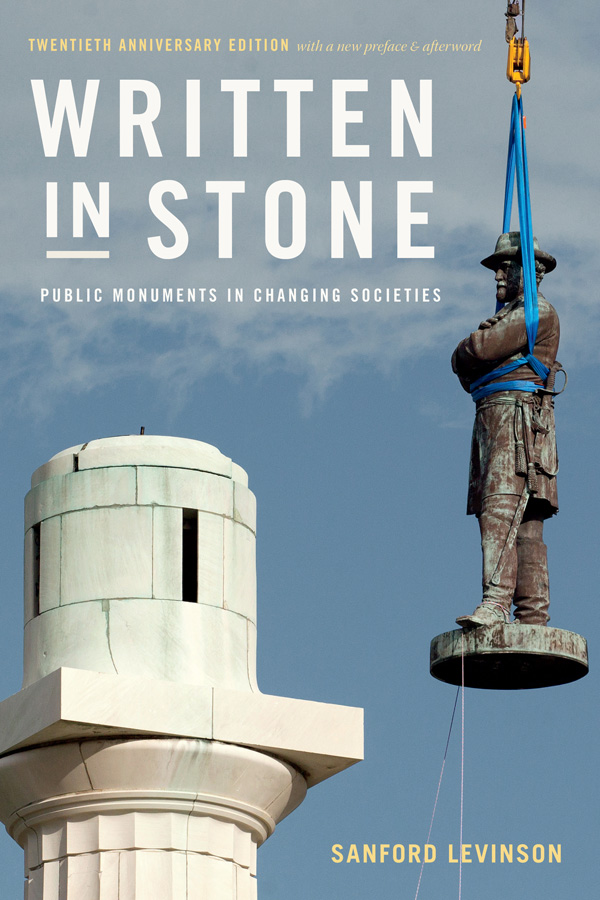 But, already, I have sent emails to my editor, Miriam Angress, suggesting, only half-jokingly, that we begin thinking of a 25th anniversary edition in 2023, for the simple reason that the central topic—how do sometimes drastically changing societies come to terms with monuments, building names, and other such efforts by previous ruling elites to shape a certain view of the society that reflected their own hegemony?—constantly generates brand new, and challenging, examples.

So even in the relatively brief period between the time the book went to press and its publication in October, new examples have arisen from around the world.  Consider the response in Lithuania to a book written by the American granddaughter of a Lithuanian “hero” who had valiantly opposed Soviet hegemony; indeed, he was executed by the Soviets.  In the course of her research, she discovered that he had also been a vigorous anti-Semite and collaborator with Nazis during World War II. An almost full-page story in the New York Times detailed the anguish these discoveries caused the granddaughter, who had expected to write a hagiographic biography of her esteemed grandfather, but who believed that historical facts had priority.  As one might imagine, many present-day Lithuanians do not want to be told that their hero, suitably commemorated in statuary and the names of schoolhouses, might have had feet (at least) of clay. Older readers might remember the great film Who Shot Liberty Valence?, the most memorable line of which is a newspaper editor’s saying that when faced with a choice between reinforcing the legend or writing about the perhaps disillusioning truth, “print the legend.”  Memorialization is quintessentially about myth-making and preservation; suggestions to tear down, or even supply more nuance, to monuments is to attack myths that are important to lots of people. It is not surprising that they resist having their illusions (or outright delusions) shattered.

Within the United States, students at the University of North Carolina tore down the statue of “Silent Sam,” the anonymous figure commemorating soldiers in the Confederate Army that fought to secure North Carolina’s independence from the United States (and also, of course, to maintain the system of chattel slavery).  This triggered a strong response from the conservative Republican legislature, and it remains to be seen what the ultimate outcome will be with regard to a possible restoration of the statue. The University of Mississippi quickly announced that it would change the name of one of its buildings when it was discovered that the generous benefactor who contributed to its construction (perhaps on condition that it would be named after him) had sent out racist tweets.  A California state college that memorialized “Prospector Pete” as a quintessential participant in the great California Gold Rush of 1849 decided to remove the statute (and change the name of some sports teams from the “Forty Niners”) when informed by a number of Native American students that from their perspective these invading miners were basically imperialists who had destroyed the existing Indian culture and, therefore, deserved no public honor. One might wonder if San Francisco’s professional football team will now receive any of the criticisms that have been long directed at the Washington football team’s use of a racist term as its name.  And Stanford University announced that it would change the name of the street on which it is officially located from Junipero Serra Way to Jane Stanford Way. Father Serra, the most important force behind the settlement of California by Catholic missionaries (and the missions they built throughout the state), is also now regarded by many in California as an agent of imperialism and cultural destruction.

As suggested in the new materials for the Second Edition, the rise of the #MeToo Movement has also called into question a number of namings of buildings at universities and elsewhere.  One can be confident that that many more examples will emerge in the future. One suspects that the reports discussed in the text by the New York Mayor’s commission on public monuments, or by select committees at Harvard, Yale, and Princeton will be avidly read elsewhere, as will former New Orleans Mayor Mitch Landrieu’s truly great speech explaining the removal of  Robert E. Lee from his pedestal atop Lee Circle in that city. The physical removal provides the truly wonderful cover of the new edition of Written in Stone.

There have even been suggestions that Austin, Texas consider changing its name, given that Stephen F. Austin held slaves and that one impetus for the secession from Mexico that created the Republic of Texas over which Austin presided was to assure the maintenance of chattel slavery.  One can doubt that Austin will in fact change its name, any more than Ohio will seek a more anodyne name for its state capital honoring Columbus, the subject of significant and ambivalent discussion by the New York Mayor’s committee. The only thing one can be confident of is that the problems posed by monuments and namings will not be going away in the foreseeable future anywhere in the world.

Read the introduction to Written in Stone free online, and purchase the paperback for 30% off using coupon code E18STONE.

The most recent issue of Ethnohistory entitled “Colonial Mesoamerican Literacy: Method, Form, and Consequence,” is “overstuffed with expertise and insight, corpulent with many lifetimes of immersion in indigenous languages and cultural traditions,” journal editor Matthew Restall writes in the Preface. This special issue edited by Kathryn E. Sampeck includes ten articles in history, anthropology, archaeology, linguistics, literature, and art history. The articles illustrate how all kinds of symbolic communication are part of the matrix of literacy and broadens the notions of canonical colonial writing by showing that formulaic texts were in fact variable and entrenched in local dialects and history. Topics include scribal variation and interaction, pictorial texts, Mayan translations of European astrological texts, change in literacy and literature in Guatemala, Maya medical incantations, and alphabetic literacy. The issue also includes a color image gallery to complement the articles.

If you find this interesting, you may also wish to read our books, which focus on literacy in colonial Latin America. In The Cord Keepers, the distinguished anthropologist Frank Salomon breaks new ground with a close ethnography of one Andean village where villagers, surprisingly, have conserved a set of these enigmatic cords to the present day. The “quipocamayos,” as the villagers call them, form a sacred patrimony. Keying his reading to the internal life of the ancient kin groups that own the khipus, Salomon suggests that the multicolored cords, with their knots and lavishly woven ornaments, did not mimic speech as most systems of writing do, but instead were anchored in nonverbal codes. The Cord Keepers makes a compelling argument for a close intrinsic link between rituals and visual-sign systems. It indicates that, while Andean graphic representation may differ radically from familiar ideas of writing, it may not lie beyond the reach of scholarly interpretation.

Frank Salomon continues his investigation into Andean literacy in The Lettered Mountain. In this book, he and Mercedes Niño-Murcia expand notions of literacy and challenge stereotypes of Andean “orality” by analyzing the writings of mountain villagers from Inka times to the Internet era. Their historical ethnography is based on extensive research in the village of Tupicocha, in the central Peruvian province of Huarochirí. The region has a special place in the history of Latin American letters as the home of the unique early-seventeenth-century Quechua-language book explaining Peru’s ancient gods and priesthoods. Granted access to Tupicocha’s surprisingly rich internal archives, Salomon and Niño-Murcia found that legacy reflected in a distinctive version of lettered life developed prior to the arrival of state schools. In their detailed ethnography, writing emerges as a vital practice underlying specifically Andean sacred culture and self-governance. At the same time, the authors find that Andean relations with the nation-state have been disadvantaged by state writing standards developed in dialogue with European academies but not with the rural literate tradition.

In Beyond the Lettered City, the anthropologist Joanne Rappaport and the art historian Tom Cummins examine the colonial imposition of alphabetic and visual literacy on indigenous groups in the northern Andes. They consider how the Andean peoples received, maintained, and subverted the conventions of Spanish literacy, often combining them with their own traditions. Indigenous Andean communities neither used narrative pictorial representation nor had alphabetic or hieroglyphic literacy before the arrival of the Spaniards. To absorb the conventions of Spanish literacy, they had to engage with European symbolic systems. Doing so altered their worldviews and everyday lives, making alphabetic and visual literacy prime tools of colonial domination. Rappaport and Cummins advocate a broad understanding of literacy, including not only reading and writing, but also interpretations of the spoken word, paintings, wax seals, gestures, and urban design. By analyzing secular and religious notarial manuals and dictionaries, urban architecture, religious images, catechisms and sermons, and the vast corpus of administrative documents produced by the colonial authorities and indigenous scribes, they expand Ángel Rama’s concept of the lettered city to encompass many of those who previously would have been considered the least literate.

Spring flew by and June is already here! As usual, we’ve got some great new books to ring in the new month.

In Architecture at the End of the Earth: Photographing the Russian North, featuring nearly two hundred full color photographs by William Craft Brumfield, the author and photographer documents the architecture of centuries-old wooden and brick churches, cathedrals and homes in the region surrounding the White Sea, which is known as the Russian North.

Nayoung Aimee Kwon examines the Japanese language literature written by Koreans during late Japanese colonialism in Intimate Empire: Collaboration and Colonial Modernity in Korea and Japan. She demonstrates that simply characterizing that literature as collaborationist obscures the complicated relationship these authors had with colonialism, modernity, and identity, as well as the relationship between colonizers and the colonized.

In Uplift Cinema: The Emergence of African American Film and the Possibility of Black Modernity, Allyson Nadia Field recovers the forgotten body of African American filmmaking from the 1910s, which she calls uplift cinema. These films were part of the racial uplift project, which emphasized education, respectability, and self-sufficiency, and weren’t only responses to racist representations of African Americans in other films.

Black Atlas: Geography and Flow in Nineteenth-Century African American Literature presents definitive new approaches to black geography, showing how the rethinking of place and scale can galvanize the study of black literature.