Our final World Cup guest post is by Orin Starn, author of The Passion of Tiger Woods and co-editor of The Peru Reader, as well as series editor for The Latin America Readers and The World Readers. He is Professor and Chair of Cultural Anthropology at Duke University.

I’ve  watched the World Cup from a shantytown in desert Peru.

I’m here doing intensive ethnographic research—well, actually just hanging out—with my two-year old, Lucien. We’re living with a family I’ve known for almost thirty years. Back when I arrived in their village as a young anthropologist, the Córdovas lived in a mud farmhouse up in the Andes. They later followed the great Peruvian migrant trail, a million Joads, down to the big coastal cites. Their hot sandy slum is just a circle removed from hell, at least by regulation American standards. It’s a place of burning garbage piles and swirling dust storms where turkey buzzards, rats and scabrous dogs everywhere patrol for scraps. Life is still much better for the Córdovas. Now they live in a tin-rooved shanty with real matresses, a gas stove, running water, electricity, and internet pirated from a relative next door. There’s also a television that grabs the World Cup with only some good old-fashioned squiggly static.  I’ve found caring for a two-year old here to be sport in itself without the changing table, diaper wipes, and the Babies-R-Us rest, and an extreme one at that. But Lucien is a celebrity with his little blonde curls in a universe of black straight hair. And he gets passed around between houses and relatives in this world where people do not shut themselves off from each other as we so often do in the United States.

Few here care all that much about the World Cup, contrary to the stereotype of a soccer-crazed subcontinent. Peru hasn’t made it to the World Cups for two decades. You see high shantytown skills in the fulbito, or mini-football,  played in the concrete schoolyard and sandy streets.  But poverty, league corruption, and bad facilities have kept the country from developing any real top-flight players since Teofilo Cubillas, the graceful Afro-Peruvian star who scored eight World Cup goals. Nor is Peru really much of a sports culture. Its genius lies in music, the arts, history, and, now food, with three Peruvian chefs ranked among the world’s top twenty. And then there’s also the gift and curse of Peru’s spectacular outsized geography of tropical jungles, Saharan deserts, and Himalayan peaks.

That doesn’t mean that soccer doesn’t matter. Consider the Neymar haircut of Fernando, a Córdova nephew: 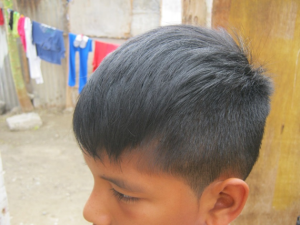 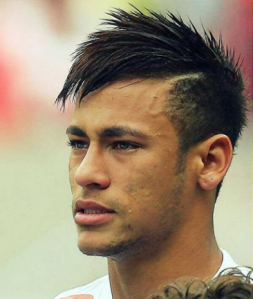 Fernando wanted to dye the floppy top blonde for the full Neymar effect.  “But my parents wouldn’t let me.”   He’s still only ten. He’d had the straight line cut of Daddy Yankee, the reggaeton superstar, the year before:

Now, Fernando says, four or five other boys in his fifth grade class have also gone Neymar. A  little Peruvian boy with the doo of a Nuyorican music idol and now the fallen Brazilian soccer superstar?  Hair has gone global like everything else.

I ask Fernando why he likes Neymar. “I saw him in some games. He’s fatal, great – he always makes his team win.”   It’s television and the Internet, of course, that led Fernando to Neymar, the great enablers of global celebrity and sports circuits. “I found his pictures on Google. My Dad showed the barber on his phone.”

Hair, as the old school anthropologists liked to remind us, can stand for many things. Status: the Manchu queue and Sun King’s curly wigs. Rebellion: Cromwell’s roundheads, the Rasta’s dreadlocks, and the punk’s mohawk. Religion: the monk’s tonsure and Sikh’s uncut turbanned hair. And even, by its absence, the darkest human suffering,  as in the chemotherapy patient’s baldness or the concentration camp prisoner’s shaved head. Hair may be the most flexible and polysemous sign in the cabinet of body politics.

But for Fernando, hair is as much as anything about idol worship, the little boy’s eternal copycat desire to be like the mythical Olympians.  He was rooting for Brazil, but mostly for Neymar, though he didn’t seem too distraught about his hero’s injury. The day after, he came to show me this meme on his cousin’s laptop.  It had gone viral in Latin America:

The rhyme that makes the meme funny, at least to non-Brazilian fans, only works in Spanish—between ardilla, squirrel, and rodilla, knee.

Zuñiga asks, “Neymar, did you see the squirrel?”

“The squirrel,” Zuñiga says, “that’s kicking you in the back.”

Fernando didn’t seem too stricken by Brazil’s black day against Germany. He got bored halfway, going out to ride his skateboard on a cracked chunk of sidewalk.

There’s little pan-Latin American solidarity in football fandom. National allegiances trump continental ones; the global south remains a term more for postcolonial academics than a felt sentiment here.  Brazilians have something the reputation of the old ugly Americans here, the arrogant tourists.  Argentina seems very far away, and it has treated its Peruvian immigrants poorly—maids and construction workers. There was a sprinkling of Brazil, Argentina, Germany, and even Dutch supporters among the Córdova clan, though no one was going to lose any sleep over the results:

One cousin, Cristina, did say she felt sorry for the Brazilians, a touch of human kindness.

Fernando’s sister, Made, 11, is a Messi fan, rooting for Argentina.  She was the secret weapon for her the sixth grade team at the Nuestra Señora de Lourdes school. Her coach would bring her in to play right wing when the team had to have a goal.  The other coaches complained that having a girl violated school rules, however, and Made didn’t like some of the boys shouting insults at her either. In Peru’s brand of soccer sexism, boys play soccer, and girls, if they play sports at all, play volleyball (and, it should be noted, the Peruvian women’s volleyball team took home the silver medal in the 1988 Olympics in a great underdog story of modern sports).  Made doesn’t play anymore, though with her gold-studded flatbill hat and cool funky look she’s not heading for Barbieland either. 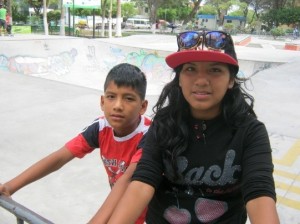 I ask Fernando how long he’ll keep his Neymar cut. He’s not sure. Until, smiles his father Yonny, something new comes along from the  “fábrica de los suenos—the dream factory,” the shining online world of myth and fantasy by the gigabyte.

It seems to me enough worth recording the moment to snap one last picture of Fernando outside the house.

He holds his ball in his own little World Cup fold in time.