Welcome to the University Press Week blog tour! Today we offer a guest post on the power of indie bookstores by Kristen Ghodsee, author of The Left Side of History: World War II and the Unfulfilled Promise of Communism in Eastern Europe (2015).

On May 23, 2016, I woke up in Helsinki to an email containing a voice to text transcript of a message from someone called “Kathy,” claiming to be based in the office of the governor of California.  I deleted the message.  It was election season and they were probably asking for money, I thought.  No one uses land lines unless they’re asking for money.

But the next message in my inbox was from my administrative coordinator back at Bowdoin College.  She forwarded me a message left on her voice mail from the same Kathy who stated that Jerry Brown “would like to speak with Professor Kristen Ghodsee.”  I did a quick Google search of Kathy’s full name, and found that she indeed worked in Sacramento for the governor’s office.

But why would the governor want to speak with me?  As a Californian and a product of two public universities in the Golden State, I wondered if this had something to do with projected changes to the UC system.  I grew up under Jerry Brown.  I was four years old in San Diego when he was first elected governor at the age of 36 in 1974.  He served as “Governor Moonbeam” until I was 13.  Many years later I was a doctoral student at Berkeley when he became the mayor of neighboring Oakland, but I had already relocated to Maine when he was sworn in for his third term as California governor in 2011, succeeding the “Governator,” Arnold Schwarzenegger.  He was serving his fourth term 2016.

Soon after, I received a direct email from Kathy.  I told her I was on leave in Finland, (ten hours ahead of Pacific Standard time), and asked what this was about.  She wrote: “Hello and thank you for your reply. I believe he was hoping to chat with you about “To the Left of History.” Would a phone call be possible? And if yes, could you please provide some possible times when you might be available?”

It turns out that Governor Brown hangs around the City Lights Bookstore in San Francisco and stumbled upon a copy of my book, The Left Side of History on a shelf there.  Intrigued by the title, he bought and read it and wanted to discuss the book with me.  Thus ensued a series of conversations that lasted for the next six weeks as Governor Brown and I corresponded by phone and email.  Once on a intercity train between Tampere and Helsinki, my mobile phone rang and I ended up having to sit in a cramped sound proof booth for an hour while the Governor and I discussed East European politics and his upcoming trip to Bulgaria.

Governor Brown would be traveling to the small Balkan country in early July with his wife and two friends.  He asked me to help arrange meetings for him in Sofia, but also if it would be possible for he and his wife to meet Elena Lagadinova, the 86-year-old protagonist of my book.  Lagadinova had been the youngest female partisan fighting against the Nazi-allied monarchy in Bulgaria during World War II.  My book was an attempt to recuperate the heroism of those who fought on the “left side of history:” mostly communist idealists who risked their lives to defeat fascism. 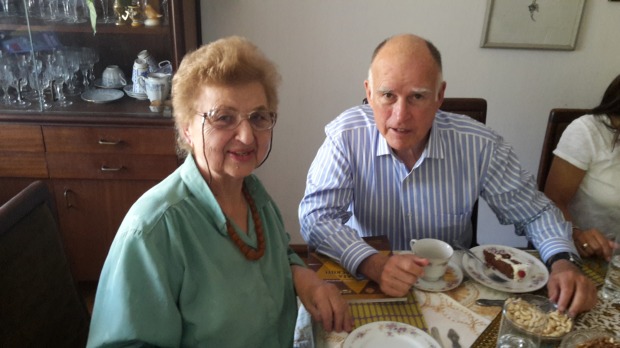 And so it was on July 8th, that the sitting governor of California shared tea and cakes with Elena Lagadinova in Sofia, a meeting made possible through a healthy does of serendipity and the astounding power of university press books and independent bookstores to bring stories and people together despite the decades and oceans between them.